James Rigby spent years driving past the mighty Murtoa Stick Shed in awe of its size and wondering how on earth the monolithic structure looming up out of the landscape could still be standing. He never imagined that one Spring day in 2017 together with Jane Thompson, he would lead around 300 community singers in a Big Sing under its cathedral-like roof of bush poles and corrugated iron.

The idea for a Stick Shed Sing was conceived by Judith Welsh, Chair of the Committee of Management which took over the running of the shed when it was gifted back to the community in 2016. The vision was to create an event to reflect the ambience and glory of the Heritage listed building and bring singing into the shed for the first time as part of Murtoa’s Big Weekend celebrations.

“We wanted an event that anyone could join in on but which gave local choirs, the singers from the Wimmera, an opportunity to perform as part of a massed choir, as well.”

As highly experienced community singing leaders, Jane Thompson and James Rigby expressed their interest in coordinating the event, working with Judith to decide a shape for the day, which included a massed singing workshop open to anyone keen to sing in the shed and a concert by any community choirs attending, who were happy to perform.

The first Stick Shed Sing was held in October last year, attracting a huge amount of interest from within the local community and further afield with around 6 full choirs performing at the concert and individual singers from many other choirs attending too.

“We had the signing choir from Horsham Primary School where AUSLAN is taught as a second language, which was lovely as it meant there was lots of children’s energy in the building too.”

The Signing Choir sign what they sing, culminating in a dance-like blend of a song’s rhythm and the natural gestures of the signs. This theatrical style of delivery is well suited to the vast, 270 metre-long Stick Shed where you can occupy as much space as physically possible and still feel incredibly small.

James and Jane found that facilitating singing of any sort in a space the size of the Stick Shed is not without challenge – all part of the excitement of being there. For a start, there is the all-important issue of acoustics.

“The shed is like a tent with an incredibly long, high pitched roof so the acoustics vary dramatically, whether you go in near the edges close to the roof, or whether you stand in the middle of it underneath the ridge, at which point the acoustics disappear. What we found was that about two-thirds out from the edge you hit this magic sweet spot where the natural reverb of the shed is really flattering to the singing and meant we could hear ourselves and, when singing as a group, what the group was sounding like.”

As luck would have it, this particular area of the shed is well lit by a line of skylights set into the roof enabling the singers to see all that is necessary whilst feeling a part of that beautiful big space, and with the added option of gazing at the clouds moving above them over the Wimmera.

For the workshop, James and Jane used ‘Here in the Stick Shed’ a short warm-up song written for the occasion by Jane, and a song about trees by Scott Wise called ‘Hold up the Sky’.

“We sang a beauty about trees and how they hold up the ground in mines, and on the land they hold up the road, and then when you get to the forest they hold up the sky. It’s a beautiful song about how trees prop up everything all around us and of course we’re standing in a shed where there’re these ridiculously tall little skinny mountain ash poles holding the whole thing up…”

For everyone involved in the Stick Shed Sing, James believes the first show stopper of the day was probably the magnificence and scale of the shed itself:

“You approach this massive looming building through the Wimmera wheat lands, it’s bright, it’s flat and then you go into the shed through this administrative area and suddenly you’re inside this dark and immense space… I can only say that it’s like walking into the most amazing, ancient cathedral in Europe, that’s the sense of scale and the sense of awe it inspires when you first walk in, you can’t quite believe it.”

The venue is too big to simply whip a vacuum or broom over, so a day before the community choirs and singers arrived armed with picnics and BYO seating, a street sweeper from the neighbouring shire was brought in and driven up and down to prepare the space. Pieces of conveyor machinery still hang from the ceilings in some spots, evidence of the shed’s industrial heritage.

On a personal and professional level, James and Jane were delighted to have assembled another group of community singers in such a unique setting.

“Jane and I have worked quite a bit in the North and the West of the state and had probably connected with a lot of the individuals who sang with us on that day at some point previously, but we hadn’t worked with any of the choirs before and had no idea of their skill levels, we were assembling a really diverse bunch of singers. In finding a song by an Australian songwriter which spoke about trees and then feeling like we were standing in a forest was a very powerful thing and it connected the people and the place and the music. On an emotional level it worked really well.”

“The trick of running an event with multiple choirs is to really balance the effort that choirs are making to get there with the opportunity to showcase what they do and what they’ve learned. You can’t ask a highly rehearsed hardworking choir to drive 3 hours to Murtoa and then only give them time for one song. Neither do you want to force a smaller choir, meeting less frequently, to get up and sing five songs. It’s a challenge to make sure we respect the capabilities and the ambitions of all of the choirs.”

The mighty Murtoa Stick Shed is a monument to an older time, built during the second world war to stockpile grain at a point when no steel was available, it is the world’s largest remaining timber-built shed and its iconic void is filled with echoes of its industrial past where the dust motes carry history as they drift in the shafts of light. It’s an evocative place with the capacity to emotionally move anyone stepping into it.

If you missed the opportunity to make the sticks ring last year, there’s an opportunity for community choirs and singers to do it all over again and make music together in this amazing space on Saturday October 6. With Jane overseas, James will be going in on his own this year but, as he says, he knows what the challenges are and is already genuinely excited and looking forward to stepping back into the Stick Shed’s phenomenal space:

“…there will be the need for some big moments. You have a big crowd in a big space and it’s very satisfying to have a go at filling that mighty venue with sound.” 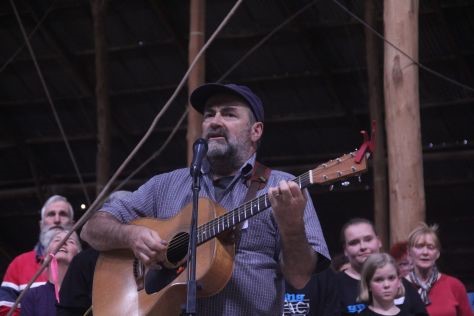 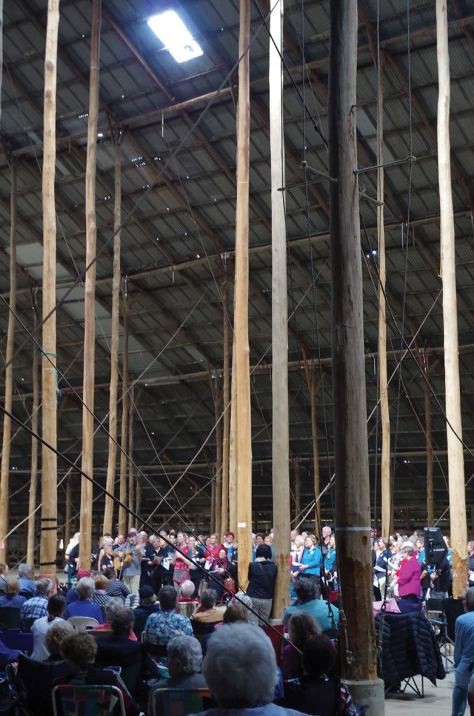 Join James Rigby for the second Stick Shed Sing on Saturday October 6th, 2018. For more information and to express an interest in participating in the workshop and/or afternoon concert with your choir (or as an individual!) contact office@makingmusic.com.au